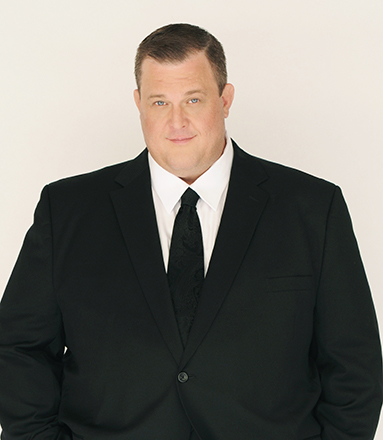 Billy Gardell stars in the CBS Hit television series, MIKE& MOLLY as Officer Mike Biggs. MIKE & MOLLY garners approximately 13 million viewers every week. In addition, he will be hosting the new syndicated “Monopoly Millionaires’ Club”, which premiers in 2015. Before Mike and Molly, Gardell co-starred in the critically acclaimed television series “Lucky.” His other television credits include “Yes Dear” and “Judging Amy,” on the Network, “My Name is Earl,” “The Practice,” “Monk” and “Gary the Rat.” Gardell took the long road to Hollywood, stopping at every small town lounge, military base and comedy club along the way.

His comedy act took him to Los Angeles where his dedication to acting, along with touring as a stand-up comedian, allowed him to grow consistently in both arenas. His stand-up show is a powerhouse. His grounded, down-to-earth point of view strikes a strong chord with American audiences. As a standup comic, his comedy specials, “Billy Gardell: Halftime,” premiered on Comedy Central and “Billy Gardell Presents Road Dogs” premiered on Showtime. In addition he makes regular appearances on “NFL Today” on CBS Sports.