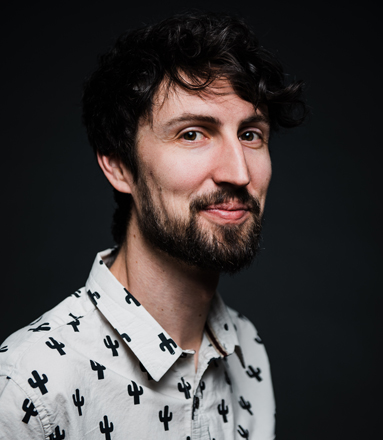 In 2015 David Rodriguez burst onto the Colorado comedy scene by winning Denver Comedy Works’ prestigious New Faces Competition (previous winners include Adam Cayton-Holland and Josh Blue). In 2016, he proved it was no fluke by taking 1st place in the Stand-up Showdown at the Denver Improv, and then in 2017 he won the Comedy Works’ Funny Final Four.

He has been recently featured on NPR for his standup and has performed on several great festivals including the Altercation, Bird City, Limestone, and High Plains Comedy Festivals as well being selected to the New Faces showcase at Just For Laughs in Montreal in 2018.

Audiences of all ages and backgrounds respond to his vibrant comedic style, which is a mix of animated story-telling and insights into being a responsible young parent living in a generation where growing up is generally frowned upon.

When he isn’t performing at clubs and indie rooms across the country, he is at home with his wife and two kids and small dog trying desperately to nap.

Based in northern Colorado, David Rodriguez is a comedian, husband, and father of two. His major credits include being selected to the Just For Laughs festival in Montreal, being featured on NPR for his standup, and getting his children to school on time almost every day.