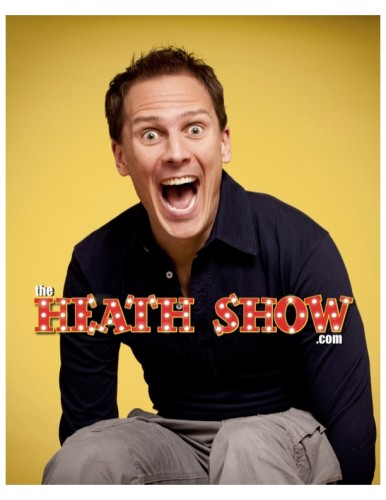 After being discovered by an agent during a gig at the Comedy Store in LA, his first television role was on Roseanne’s “Saturday Night Special.” The neophyte found himself auditioning for the female comedy legend who cast him on the show. Soon, Hyche was back in Alabama, preparing for a cross-country drive and trying to figure out what a “table read” is. Other credits include an appearance on Two Guys and a Girl, the Tonight Show with Jay Leno, and These Old Broads, with Shirley MacLaine, Joan Collins, Elizabeth Taylor, Debbie Reynolds and Jonathan Silverman. He was a regular on Style and Substance, with Jean Smart and Nancy McKeon. Recent pilots include Jack’s House and a leading role in Mark of Greatness.

On the big screen, Hyche appeared in the films Man on the Moon and The Odd Couple II.

The Heath Show is best described as a one-man, high-energy, sketch show. Quick-change costumes, original music, sound effects, and cleverly constructed props and scenery enable Heath to take the audience on a journey through his vivid imagination to meet a parade of manic characters. Crowd favorites include Spartacus Dunkleburger’s 85-yeard touchdown in a 1937 college All-Star Bowl game, to a modern day fire and brimstone revival with the charismatic Reverend Jonah Dean Coolidge.